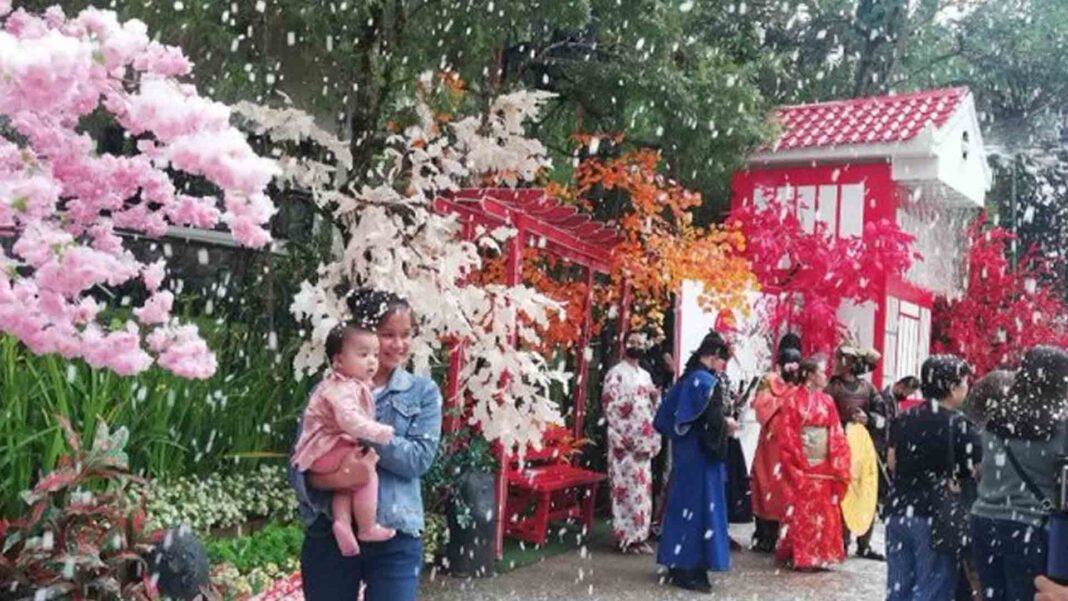 The Christmas village of the Baguio Country Club (BCC) is featuring an Asian winter wonderland ambiance on its 11th year.

“It is a mix between Korean and Japanese. Ito yung ating naisip this year para hindi na muna lumayo masyado sa Pilipinas (This is what we thought of so that visitors don’t need to travel out of the country). Besides, Christmas in Japan is extraordinary because they also have snow there,” Andrew Pinero, BCC client and public relations manager, said in an interview Friday.

The BCC’s Christmas village was conceptualized in 2011 as an additional tourist attraction. It later blossomed to have a thematic decoration such as flowers in time for the Baguio flower festival in February.

“Papasok ka pa lang ng BCC road lights na yung pasalubong sayo sa gabi, it is welcoming. Parang tinatawag ka na pumasok sa Christmas village (Upon entering BCC road in the evening you will already be greeted by lights that are welcoming you, whispering that you go to the Christmas village),” Pinero said.

Aside from lights, visitors can also see Japanese and Korean structures and themes, including the sakura (cherry blossoms) and the characters in their authentic costumes depicting both countries.

“We invested in original attires to give it more authenticity,” he added.

The mainstay snow show and the nativity are repeated now and then as a reminder of the primary reason to celebrate the season — the birth of Jesus Christ.

During the weekend, blind singers also serenade with season’s hymns the guest as an addition come on of the destination.

Senator Imee Marcos is passing a bill that would give tax exemptions to over 11 million local farmers for fertilizer and insecticides.
News

President Bongbong Marcos states that a decrease in gas prices and other agricultural products will help the country to address inflation.