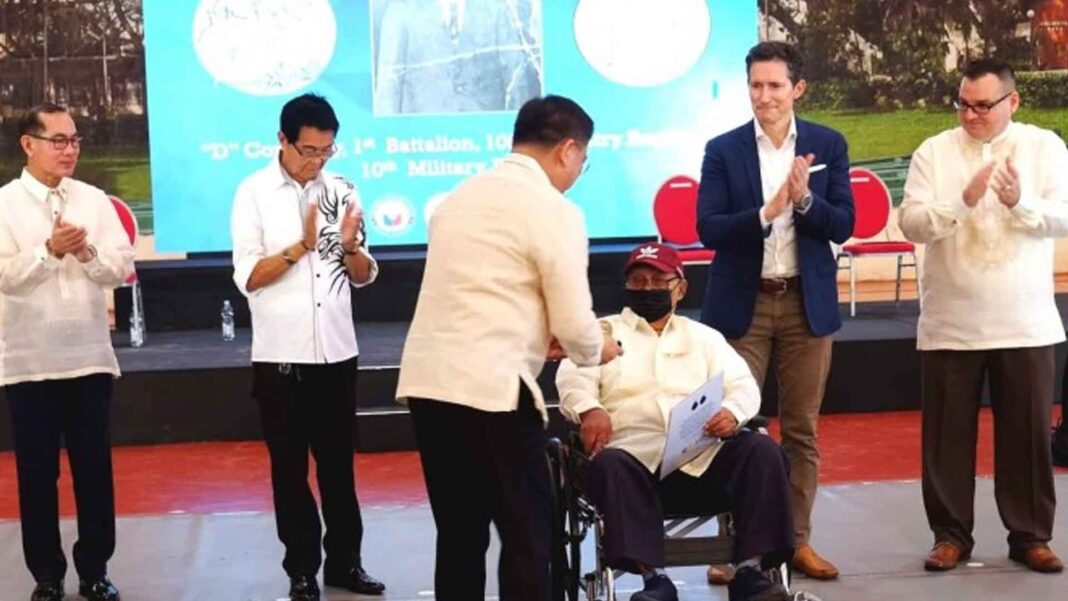 A total of 45 World War II Filipino veterans in Negros Oriental were given the United States Congressional Gold Medal during ceremonies held at the gymnasium of Silliman University in this capital city on Friday.

Senior Undersecretary Jose Faustino Jr. of the Department of National Defense (DND) expressed gratitude to the United States government for giving recognition to Filipino war heroes, noting the sacrifices that they made for the sake of the country and the world.

He said this was “long overdue” and it is just but fitting to pay them tribute noting they can set a good example of bravery, courage, and sacrifice to the younger generations.

Of the 45 awardees, only four are still alive.

“This is a very proud moment for the veterans, they are a part of our history and they give us inspiration in that whatever peace we are experiencing right now, whatever we want to hand over to the next generations, we have to backtrack and relive their bravery and heroism,” Faustino said in mixed English and Filipino.

Blackshaw, in his message, said “The United States Gold Medal is the U.S. Congress’ highest expression of national appreciation to distinguished achievements and contributions by individuals and one of the highest civilian awards” in their country.

He said his country is grateful to the Filipino war veterans even though many are no longer around.

Meanwhile, Mapagu told the Philippine News Agency in an interview that there is still a lot of “hard work” to be done for the welfare and benefit of the veterans.

“Right now I can say that we have pension and non-pension benefits for them,” he said, “as actually, veterans do not actually receive a pension.

Mapagu said the monetary benefit has been recently raised from PHP5,000 to PHP20,000 monthly.

Non-pension benefits include hospitalization and educational/scholarship for their children or grandchildren as well as a death benefit, he added.

On the awarding of the US Congressional Gold Medal, Mapagu said “this is very significant because it’s a kind of a late recognition of their heroism and their contribution to our country in terms of attaining our freedom and our independence”.

Many of them were not recognized as part of the US Armed Forces, he said.

The medals handed out to the war veterans here are replicas of the last remaining original gold medal that is now displayed at the Smithsonian Institute in the U.S., he noted. (PNA)

Department Of Agriculture To Bring Low-Priced Agricultural Products To Sagada