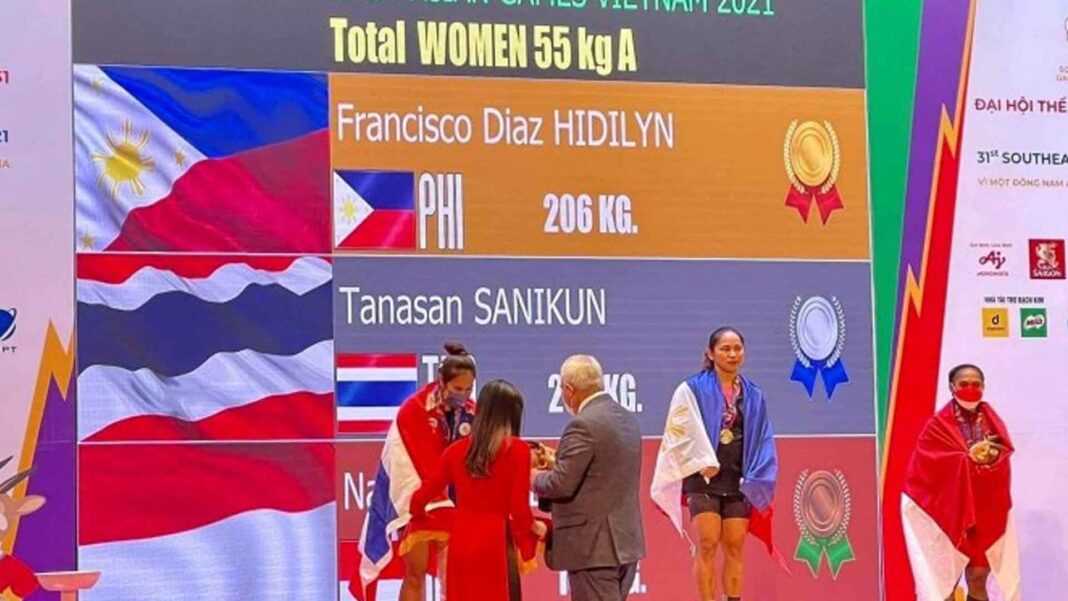 The Philippine Air Force (PAF) has expressed its appreciation to Staff Sgt. Hidilyn F. Diaz for bringing honor to the country and service by winning the gold medal in the Women’s 55kg category in weightlifting during the ongoing 31st Southeast Asian Games (SEAG) in Hanoi, Vietnam.

“The PAF is once again proud of Staff Sgt. Hidilyn F. Diaz PAF who won the gold medal for the Women’s 55kg Category for Weightlifting during the 31st Southeast Asian Games in Hanoi, Vietnam on May 20, 2022,” said Air Force spokesperson, Col. Maynardo Mariano, in a statement Saturday.

Diaz, who is from Zamboanga, was the first athlete to bring the gold medal during the 2020 Tokyo Olympics for weightlifting of the same category.

“The men and women of the PAF are proud of its soldier athletes who competed and bagged several medals for the Philippines at the 31st Southeast Asian Games,” Mariano said.

Despite being the heavy favorite, Diaz had to ward off the challenge of fellow Olympic champ Sanikun Tanasan of Thailand.

Tanasan, who won in the 2016 Rio de Janeiro Games, took an early lead in the snatch and set a new SEAG record by lifting 93kg against Diaz’s 92kg.

The deciding factor came in the clean-and-jerk when Diaz easily lifted 114kg.

“We studied our opponent, we know she’s strong in the snatch, but not so much in the clean and jerk. But of course, we cannot downplay the competition. I always do my best,” the 30-year-old Diaz said in a news release, adding that it was a struggle training for the SEAG after her busy schedule as a result of her Tokyo Olympic triumph.

Baguio Sets Thursdays Of July As Cleanup Days Vs. Dengue

Marawi Rehab To Continue Even After PRRD’s Term