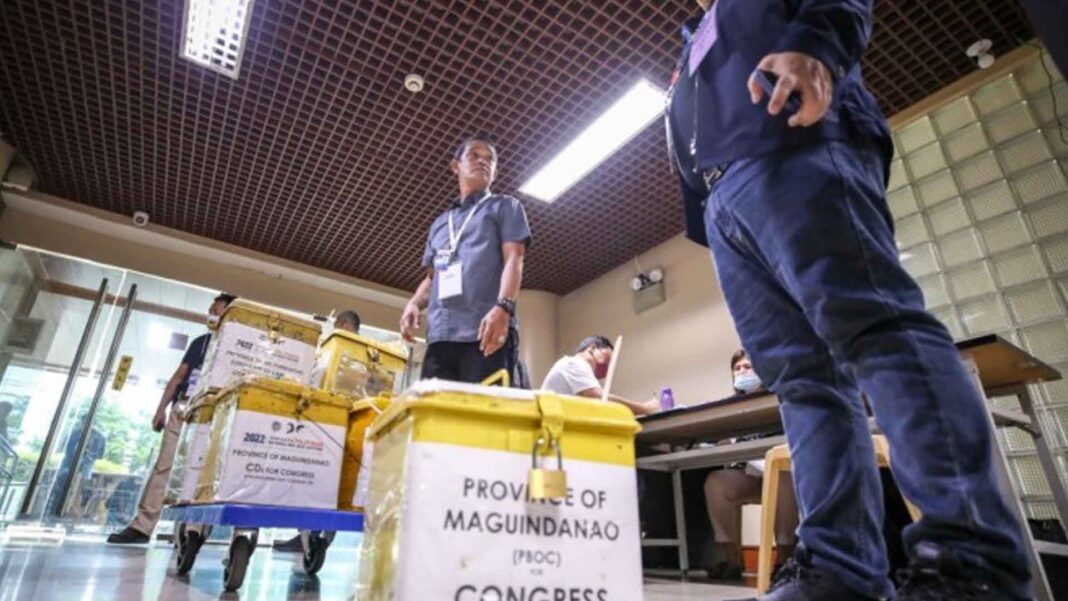 The Senate on Monday transferred a total of 156 or 90.17 percent of the 173 certificates of canvass (COCs) and election returns (ERs) to the House of Representatives at the Batasang Pambansa in Quezon City.

According to the Senate Public Relations and Information Bureau (PRIB), Senate security officers and personnel started preparing the ballot boxes containing COCs and ERs Sunday night and loaded them into 11 armored trucks and two armored personnel carriers of the Armed Forces of the Philippines (AFP).

“The Senate will resume reception of the remaining COCs on Tuesday, May 24,” the PRIB said.

It said 17 more ERs and COCs are expected to arrive at the Philippine Senate in Pasay City.

The decision to transfer the COCs and ERs was made as both the Senate and the House of Representatives are set to convene in a joint session on Tuesday to act as the National Board of Canvassers (NBOC) for the presidential and vice-presidential races and proclaim the winners.

Senate President Vicente Sotto III and House Speaker Lord Allan Velasco expect the proclamation of the new president and vice president either May 27 or 28.

Based on the partial and unofficial results from the Commission on Elections (Comelec) transparency server, former Senator Ferdinand Marcos Jr. garnered nearly 30 million votes while his closest rival, Vice President Leni Robredo, is far second with over 14 million votes in the last May 9 presidential election.

The Philippine National Police (PNP) is set to deploy cops at the House of Representatives in Quezon City to secure the canvassing of votes for the presidential and vice presidential races on Tuesday.

At a press briefing in Camp Crame Monday, PNP officer-in-charge Lt. Gen. Vicente Danao Jr. said police are ready against possible street protests by groups who have yet to accept the results of the elections.

“We have at least one company there (House of Representatives) to secure the whole area. ‘Yan lang ang babantayan nila, iyung Congress para ma-ensure (That is the only thing they will be guarding, Congress, to ensure) that the process of canvassing and the final proclamation of our president and vice president would not be hampered by anyone,” Danao said.

The Senate and House of Representatives will convene in a joint session and start the canvassing of votes on Tuesday.

Both houses have the constitutional duty to convene as National Board of Canvassers to count votes and proclaim the winners of the two highest posts in the land.

The ballot boxes containing the certificates of canvass (COCs) were transferred from the Senate building in Pasay City to the Batasang Pambansa in Quezon City early Monday.

Some protesters claimed that electoral fraud marred the May 9 elections but the Commission on Elections and poll watchdog Parish Pastoral Council for Responsible Voting have already refuted these claims.

Protesters are also warned that police will not hesitate to disperse protesters in areas that they are not allowed to gather.

“Kung yung area naman ay bawal lalong lalo na ‘yung canvassing area eh talagang bubuwagin kayo diyan (If the area is not allowed, especially the canvassing area, then we will disperse you). So I am asking for prudence and sobriety to all those rallyists to please calm down,” Danao said.

Maj. Gen. Valeriano de Leon, Director for Operations, said rally organizers must secure the necessary permits from the local government units (LGUs) concerned and ensure that they can police their own ranks to prevent violence.

De Leon said enough police forces would be deployed to ensure peace and order at the Senate in Pasay City and the House of Representatives in Quezon City. (PNA)

BIGO Live: Taking Livestreamers One Step Closer To Their Dream