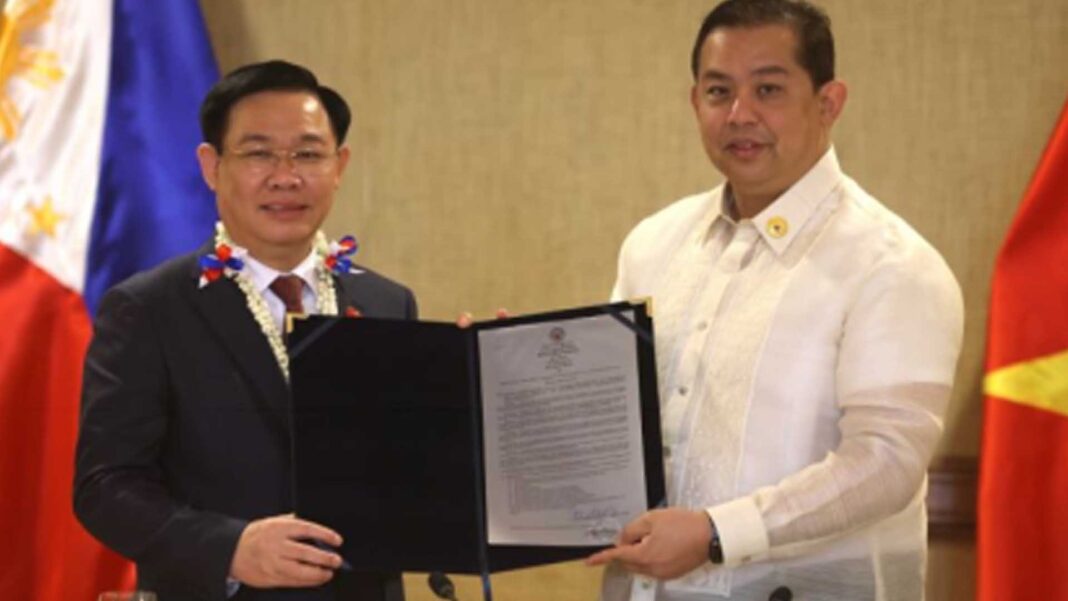 House of Representatives Speaker Martin G. Romualdez on Wednesday welcomed his Vietnamese counterpart, National Assembly of Vietnam Chairman Vuong Dinh Hue, and presented the latter with a copy of a resolution seeking to further strengthen the two countries’ ties through the Philippine-Vietnam Parliamentarian’s Friendship Society.

“Mr. President, please accept this copy of House Resolution (HR) No. 34 as a token of the commitment of the House of Representatives to be a steadfast partner of our Vietnam brethren, walking lockstep along the path of mutual peace and development for both our nations,” said Romualdez, who is the principal author of the resolution.

In return, Hue thanked Romualdez and the Philippine lawmakers for their warm welcome as he emphasized the importance of strengthening the strategic partnership between the two countries and enhancing trade and economic relations, as well as people-to-people exchanges.

Hue is accompanied by other Vietnamese lawmakers and government officials during his three-day official visit to the country.

The Vietnamese delegation’s first visit was at the House on Wednesday morning.

HR 34 noted that among the 10 member countries of the Association of Southeast Asian Nations (Asean) Inter-Parliamentary Assembly (AIPA), “the Philippines and Vietnam have developed a special relation through the years anchored on shared goals, common visions, and mutual interests for the benefit of their peoples and towards a genuinely peaceful and productive path in regional cooperation.”

“As a member of the Asean, the Philippines accords great importance to its continuing friendship with the member countries, especially with Vietnam, and views the friendship and historical ties of solidarity and cooperation among the Southeast Asian countries as essential elements to attain peace and prosperity in the region,” the resolution added.

The resolution designated the chairman of the House Committee on Inter-Parliamentary Relations and Diplomacy as chairperson of the PVPFS, with the chair of the Committee on Foreign Affairs as the vice chairperson.

Members of the PVPFS include the Deputy Speakers and the chairs of the committees on economic affairs, trade and industry, agriculture, national defense and the West Philippine Sea, along with the vice-chair of the Committee on Inter-Parliamentary Relations and Diplomacy and other members as may be designated by the Speaker.

The friendship society between lawmakers of the Philippines and Vietnam was organized on March 18, 1993 when the House unanimously adopted HR 30.

On the other hand, the diplomatic relationship between the two countries was established on July 12, 1976.

It was during the bilateral meeting between President Ferdinand R. Marcos Jr. and Vietnam’s Prime Minister Pham Minh Chinh on the sidelines of the 40th and 41st Asean Summits in Cambodia when the latter announced Hue’s visit to the Philippines.

Romualdez and Hue later met briefly during a break in the interaction of the AIPA with the Asean leaders.

In the same meeting, Marcos and Chinh agreed to strengthen their partnership as this would enhance the two country’s relations across several areas, such as defense, trade, investment, agriculture, and maritime security.

Marcos also noted that the Philippines looks to Vietnam as an important partner in ensuring food security, with Vietnam accounting for 90 percent of the country’s rice imports. (PNA)

Angara Vows For Inclusion Of Targeted ‘Ayuda’ In 2023 Budget