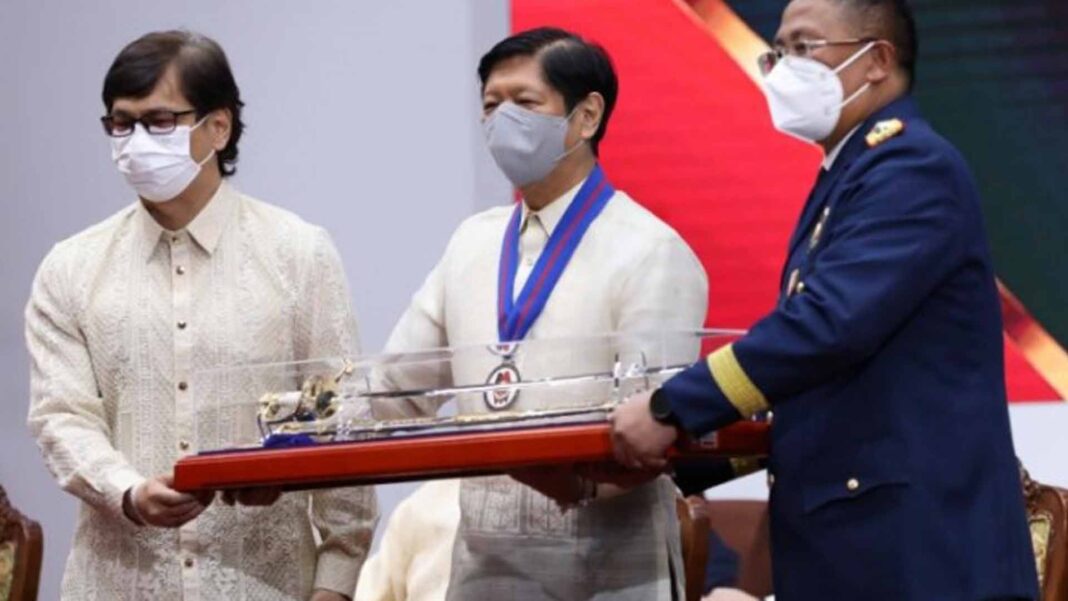 PBBM: PNP Mandate Must Be ‘Firmly Grounded’ On Moral Principles

PBBM: PNP Mandate Must Be ‘Firmly Grounded’ On Moral Principles

President Ferdinand “Bongbong” Marcos Jr. on Monday reminded police officers in the country to ensure that they are “firmly grounded” on moral principles in the performance of their sworn duties.

“It is a must that the application of your mandate is firmly grounded on moral principles: Integrity, accountability, and honesty to ensure continued public rapport and support from the public for the PNP,” he said.

Marcos said the PNP must guarantee that the use of force is “reasonable, justifiable, and only undertaken when necessary.”

He also noted that the execution of authority is “fair, impartial, devoid of favoritism or discrimination regardless of race, gender, socio-economic status, political affiliaton, and religious belief.”

“It is only then that you can effectively sustain with great respect and wide support the authority that you possess as uniformed servicemen of the Republic,” he added.

Calling members of the PNP as “vanguards of peace”, Marcos enjoined police officers to give their best without sacrificing their integrity and prevent even “a hint of dishonesty and abuse” from influencing their decisions.

He also called on police officers to actively engage the public in the collective effort toward maintaining law and order in the country.

Marcos lauded the law enforcement officers for their “unrivaled” service to the country, citing how they put their lives on the line in the performance of their duties 24 hours a day and seven days a week.

“The tremendous risks and often unseen danger attached to your line of work are immensely daunting for many and yet without hesitation the PNP continues to pursue its calling to serve and to others,” he said.

Aside from maintaining peace and order, he pointed out that the PNP is also in charge of traditional duties such as assisting in vehicular traffic, addressing emergency situations, investigating crimes, serving warrants, apprehending law violators, implementing educational outreach programs, introducing and teaching crime prevention and resolution, among others.

He also described police service as a “calling that not everyone is capable of”, adding that it requires a moral standard that demands enormous commitment and responsibility.

Marcos also reminded police officers that they will be facing criticism that will put their resolve and patience to the test, but expressed confidence that their patriotism and commitment to service will prevail.

“These attacks warranted our not unfortunately will be relentless. But I know that you are made of sterner stuff, your strong sense of patriotism and love of country, your bravery and firm commitment to serve, and with a solid support of the vast majority, there is no doubt in mind that we will overcome and triumph in the end despite all odds,” he said.

“He (Azurin) is a well-rounded officer, having served in the PNP as commander of both northern and southern Luzon areas. I am confident that we have chosen the right leader in his person to head the PNP so that it continues to evolve, continues to grow, and develop into a well-balanced institution, effective and capable of steadfastly rendering faithful service to our sovereign nation and all its citizenry,” he said.

The President said he is confident that Azurin’s leadership will complement his administration’s collective efforts to ensure a “brighter, safer, and more prosperous” country.

With Azurin at the helm of the PNP, Marcos said the police force will emerge stronger, more accessible, more responsive, more inclusive, and more relevant than ever.

He also congratulated PNP personnel and command unit awardees for their exemplary service.

“I thank you for all your service that you have done in these past few years and I look forward to your continuing level of excellent service as the time goes on and as we continue in our development programs for all beloved country,” he said.

During the event, Marcos conferred awards to PNP personnel and command units that have exhibited exemplary performance in their field of service and operations.

He also accepted a military saber from Azurin, which symbolizes the leadership and authority of the commanding officer. (PNA)

Bop To The Top: Why iWantTFC’s Pinoy Musical Series “Lyric And Beat” Is A Must-Watch