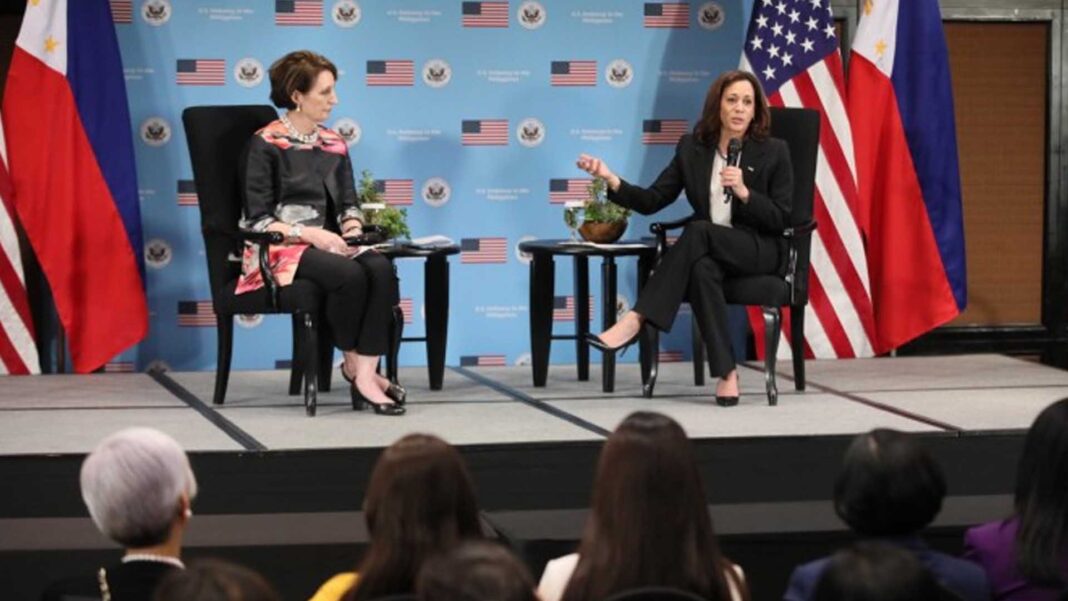 Harris met with Filipino women as part of her visit to the Philippines.

In a town hall meeting with women leaders, youth, and civil society organizations, Harris highlighted the importance of access to capital, equal access to financial literacy, and all opportunities critical to give women “a good idea, vision, and a plan” to thrive.

The meeting came as the US announced its plan to invest in Filipino women entrepreneurs.

According to a White House fact sheet dated Nov. 21, the US International Development Finance Corporation will provide a USD15.5 million loan guarantee through a framework agreement with Citibank to support ASA Philippines Foundation, a microfinance institution helping women entrepreneurs access capital and contribute to economic growth in the Philippines.

During the town hall meet, Harris also zeroed in on the importance for leaders to continue supporting and promoting the political and civic participation of women.

“[P]art of what you must remember is that there are people who came before you who charted a course for you,” she said.

“It’s basically a relay race. And so the people who are heroes, whichever gender they are, they ran their part of the race and then they passed the baton. And the question is, what will we do with the time we’re carrying it,” she added.

Quoting American author and activist Coretta Scott King, Harris said the fight for justice, human rights, equality, and fairness must be fought and won each generation as gains from this would not be permanent unless the public are vigilant to keep them up.

With years spent in promoting women empowerment and inclusion, Teves said women had to work harder than their male counterparts in the Philippines.

“Without naming names, for example, there’s a woman mayor who does certain programs, and it’s been institutionalized. And what happens is nobody really talks about it. But four weeks later, I saw her male counterpart do it on a lower scale, but he trended on Twitter. That makes me feel bad when I see that the women don’t get the same recognition,” she said in an interview.

Also in Manila, Mayor Honey Lacuna said men have been in the “topmost position” in public office for the longest time.

“(Vice President Harris) said that shouldn’t stop you and it has been proven in Manila because I got this chance and got elected as the first ever female mayor in the 451 years of the city of Manila,” she said. (PNA)

Teaser Trailer Of “Transformers: Rise Of The Beasts” Is Here!