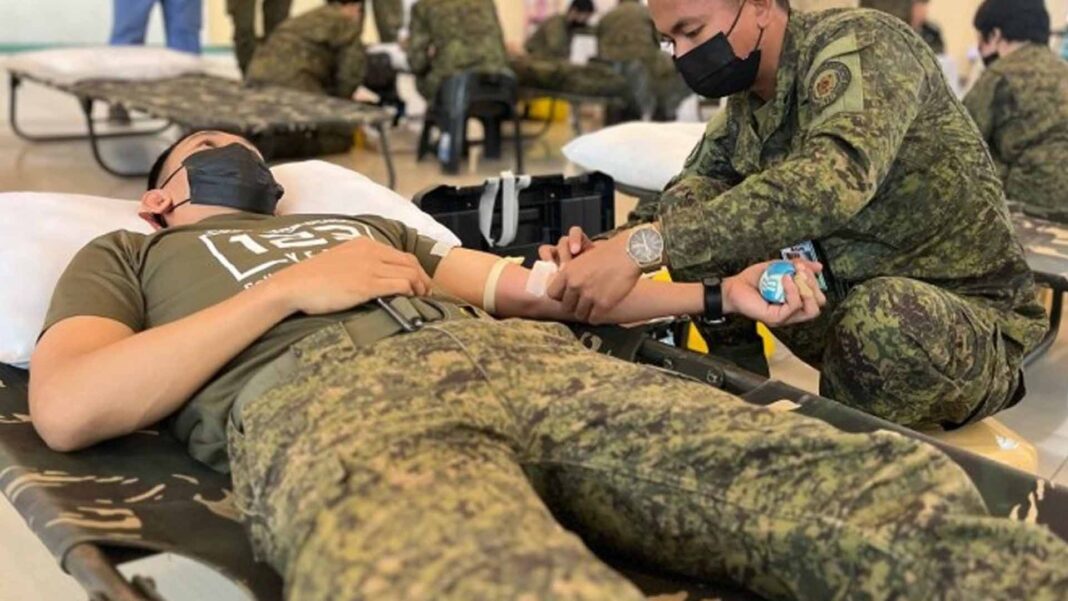 Some 33 Philippine Army (PA) troopers showed their love for the country and fellow Filipinos by donating blood so that others might get another chance to live.

This, as the Army General Hospital (AGH) in cooperation with the Armed Forces of the Philippines Medical Center launched a Yuletide bloodletting drive on Monday to celebrate its 63rd founding anniversary.

He added that this positive response by PA troops shows their commitment to serving the nation in different ways.

“The bloodletting drive showed the dedication and commitment of soldiers to save lives in a multitude of ways,” Trinidad said.

PA chief Lt. Gen. Romeo Brawner Jr. earlier said ensuring the well-being of troops under his command has been his advocacy since he began his military career shortly after graduation from the Philippine Military Academy in 1989.

”With the Army’s main thrust of prioritizing the morale and welfare of its personnel and their families, our endeavor today signifies our compassion towards our hospitalized soldiers and deepest appreciation for their invaluable service,” Brawner said.

The activity was highlighted with Brawner personally handing gift packs to each combat-wounded troops, lauding them for their bravery and sacrifice in protecting the Filipino people and safeguarding hard-earned peace across the nation. (PNA)

LTFRB Memo On Extension Of Old Jeepney Franchises Out Soon

After dominating many tournaments throughout the year, the Philippine women's football team "Filipinas" surpassed a significant milestone in 2022.
Spotlight

SM Offices introduced their newest workspaces to offer convenience to employees who strive for success after the pandemic.
News

The United Nations Food and Agriculture Organization recorded a decrease in global food prices as the cost for some necessities dropped.
News

The Senate is looking into improving the access of Mindanao students to basic education, addressing the recently recorded low enrollment in the province.